“So smart and mordant it must be read slowly and savored. A great idea, brilliantly executed.”

— Andrew Holleran author of Dancer from the Dance on The New Devil’s Dictionary: A New Version of the Cynical Classic 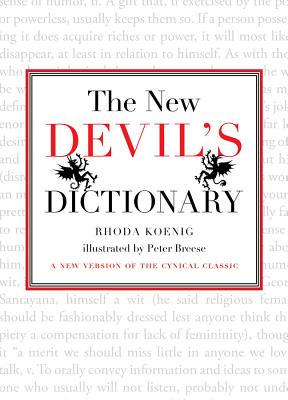 The New Devil’s Dictionary: A New Version of the Cynical Classic

Ambrose Bierce’s classic The Devil’s Dictionary first appeared in its entirety in 1911. Its caustic wit and arch tone have ensured steady popularity and sales to this day. To mark its centennial, Rhoda Koenig gives us a new version of Bierce’s mordant vision. Its myriad definitions, like the original’s, individually expose hypocrisy, pretension, and vanity and collectively paint a mocking portrait of society at its worst. More than just a denunciation of jargon or political correctness, it lambasts old and young, rich and poor, male and female, left and right, and takes them all down a peg—or three. It deals with classic subjects but also defines new ideas and explicates new usages from “academia” to “teamwork” to “women’s magazine.” Among the many definitions inside:

accessible, adj. (1) Of a subject, one that can be approached by the most intellectually handicapped, aided by the ramp of banality and the guardrail of diminished vocabulary. (2) Of a woman, a nice way of putting it.

collectible, n. Object which many are eager to possess, though it may not be attractive, entertaining, or useful. Not to be confused with “spouse.”

If you relish moral criticism of immoral behavior, The New Devil’s Dictionary will leave you howling for more.

Prev: The Never-Open Desert Diner
Next: The New Ethics