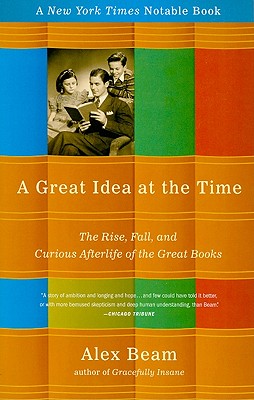 A Great Idea at the Time

Today the classics of the western canon, written by the proverbial dead white men, are cannon fodder in the culture wars. But in the 1950s and 1960s, they were a pop culture phenomenon. The Great Books of Western Civilization, fifty-four volumes chosen by intellectuals at the University of Chicago, began as an educational movement, and evolved into a successful marketing idea. Why did a million American households buy books by Hippocrates and Nicomachus from door-to-door salesmen? And how and why did the great books fall out of fashion? In A Great Idea at the Time Alex Beam explores the Great Books mania, in an entertaining and strangely poignant portrait of American popular culture on the threshold of the television age. Populated with memorable characters, A Great Idea at the Time will leave readers asking themselves: Have I read Lucretiuss De Rerum Natura lately? If not, why not?

Prev: A Great and Terrible King
Next: A Hawk in the Woods