“This honest, lucid book examines the urgent problems of family history and early diagnosis in mental illness from a personal and scientific standpoint. It will be invaluable to families trying to understand their own history, and to those who have been blind to such history.”

— Andrew Soloman The Noonday Demon: An Atlas of Depression on A Lethal Inheritance 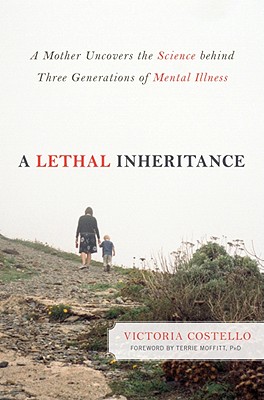 Every family has secrets; only some secrets are lethal. In Victoria Costello’s family mental illness had been given many names over at least four generations until this inherited conspiracy of silence finally endangered the youngest members of the family, her children.

In this riveting story—part memoir, detective story, and scientific investigation—in the tradition of the story of Henrietta Lacks, Costello recounts how the mental unraveling of her seventeen-year-old son Alex compelled her to look back into family history for clues to his condition. Eventually she tied Alex’s descent into hallucinations and months of shoeless wandering on the streets of Los Angeles to his great grandfather’s suicide on a New York City railroad track in 1913.

But this insight brought no quick relief. Within two years of Alex’s diagnosis of paranoid schizophrenia, both she and her youngest son succumbed to two different mental disorders: major depression and anxiety disorder. Costello depicts her struggle to get the best possible mental health care for her sons and herself, treatment that ultimately brings each of them to full recovery. In the process, she discovers startling new neuroscience and genetic findings that explain how clusters of mental illness traverse family generations.

The author closes by translating what she’s learned into a set of ground rules for “New, New Parenting,” advice to help individuals and families recover from addictions and mental disorders, and prevent their return in future generations.

Prev: A Late Dinner
Next: A Life Discarded