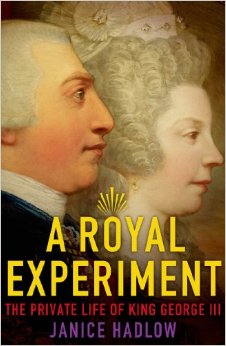 The surprising, deliciously dramatic, and ultimately heartbreaking story of King George III’s radical pursuit of happiness in his private life with Queen Charlotte and their 15 children

In the U.S., Britain’s George III, the protagonist of A Royal Experiment, is known as the king from whom Americans won their independence and as “the mad king,” but in Janice Hadlow’s groundbreaking and entertaining new biography, he is another character altogether—compelling and relatable.

He was the first of Britain’s three Hanoverian kings to be born in England, the first to identify as native of the nation he ruled. But this was far from the only difference between him and his predecessors. Neither of the previous Georges was faithful to his wife, nor to his mistresses. Both hated their own sons. And, overall, their children were angry, jealous, and disaffected schemers, whose palace shenanigans kick off Hadlow’s juicy narrative and also made their lives unhappy ones.

Pained by his childhood amid this cruel and feuding family, George came to the throne aspiring to be a new kind of king—a force for moral good. And to be that new kind of king, he had to be a new kind of man. Against his irresistibly awful family background—of brutal royal intrigue, infidelity, and betrayal—George fervently pursued a radical domestic dream: he would have a faithful marriage and raise loving, educated, and resilient children.

The struggle of King George—along with his wife, Queen Charlotte, and their 15 children—to pursue a passion for family will surprise history buffs and delight a broad swath of biography readers and royal watchers.

Prev: A Rift in Time
Next: A Royal Pain