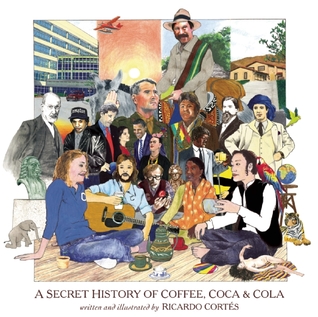 A Secret History of Coffee, Coca & Cola is an illustrated book disclosing new research in the coca leaf trade conducted by The Coca-Cola Company. 2011 marked the 125th anniversary of its iconic beverage, and the fiftieth anniversary of the international drug control treaty that allows Coca-Cola exclusive access to the coca plant. Most people are familiar with tales of cocaine being an early ingredient of “Coke” tonic; it’s an era the company makes every effort to bury. Yet coca leaf, the source of cocaine which has been banned in the U.S. since 1914, has been part of Coca-Cola’s secret formula for over one hundred years.

This is a history that spans from cocaine factories in Peru, to secret experiments at the University of Hawaii, to the personal files of U.S. Bureau of Narcotics Commissioner Harry Anslinger (infamous for his “Reefer Madness” campaign against marijuana, lesser known as a long-time collaborator of The Coca-Cola Company).

A Secret History of Coffee, Coca & Cola tells how one of the biggest companies in the world bypasses an international ban on coca. The book also explores histories of three of the most consumed substances on earth, revealing connections between seemingly disparate icons of modern culture: caffeine, cocaine, and Coca-Cola.

Coca-Cola is the most popular soft drink on earth, and soft drinks are the number one food consumed in the American diet. Caffeine is the most widely used psychoactive substance. Cocaine . . . well, people seem to like reading about cocaine. An illustrated chronicle that will appeal to fans of food and drink histories (e.g., Mark Kurlansky’s Salt and Cod; Mark Pendergrast’s For God, Country & Coca-Cola), graphic novel enthusiasts, and people interested in drug prohibition and international narcopolitics, the book follows in the footsteps of successful pop-history books such as Michael Pollan’s The Botany of Desire and Eric Schlosser’s Fast Food Nation—but has a unique style that blends such histories with narrative illustration and influences from Norman Rockwell to Art Spiegelman.

Prev: A Season With Mom: Love, Loss and the Ultimate Baseball Adventure
Next: A Semi-Definitive List of Worst Nightmares