“Scheeres shows great compassion and journalistic skill in reconstructing Jonestown’s last months and the lives of many Temple members (including a few survivors)...[A Thousand Lives is a] well-written, disturbing tale of faith and evil.”

— Kirkus on A Thousand Lives: The Untold Story of Hope, Deception and Survival at Jonestown 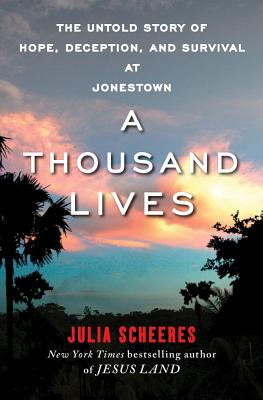 Vividly written and impossible to forget, A Thousand Lives is a story of blind loyalty and daring escapes, of corrupted ideals and senseless, haunting loss.

A Thousand Lives: The Untold Story of Hope, Deception and Survival at Jonestown

The Untold Story of Hope, Deception, and Survival at Jonestown

In 1954, a pastor named Jim Jones opened a church in Indianapolis called Peoples Temple Full Gospel Church. He was a charismatic preacher with idealistic beliefs, and he quickly filled his pews with an audience eager to hear his sermons on social justice. After Jones moved his church to Northern California in 1965, he became a major player in Northern California politics; he provided vital support in electing friendly political candidates to office, and they in turn offered him a protective shield that kept stories of abuse and fraud out of the papers. Even as Jones’s behavior became erratic and his message more ominous, his followers found it increasingly difficult to pull away from the church. By the time Jones relocated the Peoples Temple a final time to a remote jungle in Guyana and the U.S. Government decided to investigate allegations of abuse and false imprisonment in Jonestown, it was too late.

A Thousand Lives follows the experiences of five Peoples Temple members who went to Jonestown: a middle-class English teacher from Colorado, an elderly African American woman raised in Jim Crow Alabama, a troubled young black man from Oakland, and a working-class father and his teenage son. These people joined Jones’s church for vastly different reasons. Some, such as eighteen-year-old Stanley Clayton, appreciated Jones’s message of racial equality and empowering the dispossessed. Others, like Hyacinth Thrash and her sister Zipporah, were dazzled by his claims of being a faith healer—Hyacinth believed Jones had healed a cancerous tumor in her breast. Edith Roller, a well-educated white progressive, joined Peoples Temple because she wanted to help the less fortunate. Tommy Bogue, a teen, hated Jones’s church, but was forced to attend services—and move to Jonestown—because his parents were members.

A Thousand Lives is the story of Jonestown as it has never been told before. New York Times bestselling author Julia Scheeres drew from thousands of recently declassified FBI documents and audiotapes, as well as rare videos and interviews, to piece together an unprecedented and compelling history of the doomed camp, focusing on the people who lived there. Her own experiences at an oppressive reform school in the Dominican Republic, detailed in her unforgettable debut memoir Jesus Land, gave her unusual insight into this story.

The people who built Jonestown wanted to forge a better life for themselves and their children. They sought to create a truly egalitarian society. In South America, however, they found themselves trapped in Jonestown and cut off from the outside world as their leader goaded them toward committing “revolutionary suicide” and deprived them of food, sleep, and hope. Yet even as Jones resorted to lies and psychological warfare, Jonestown residents fought for their community, struggling to maintain their gardens, their school, their families, and their grip on reality.

Vividly written and impossible to forget, A Thousand Lives is a story of blind loyalty and daring escapes, of corrupted ideals and senseless, haunting loss.

Prev: A Tear at the Edge of Creation
Next: A Tolerable Anarchy