“Ambush Alley is a gut-wrenching account of unadulterated terror that's hard to read yet impossible to put down. London-based journalist and filmmaker Tim Pritchard, who was embedded with US troops during the initial stages of the American-led invasion of Iraq, paints a compelling picture of one of the costliest battles of the Iraq war that will at turns anger, horrify, and sadden, regardless of one's political views.”

— The Boston Globe on Ambush Alley 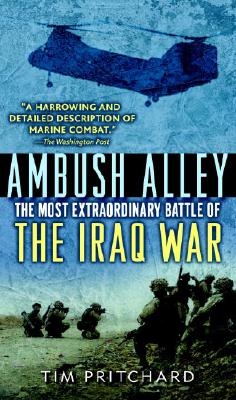 March 23, 2003: U.S. Marines from the Task Force Tarawa are caught up in one of the most unexpected battles of the Iraq War. What started off as a routine maneuver to secure two key bridges in the town of Nasiriyah in southern Iraq degenerated into a nightmarish twenty-four-hour urban clash in which eighteen young Marines lost their lives and more than thirty-five others were wounded. It was the single heaviest loss suffered by the U.S. military during the initial combat phase of the war.

On that fateful day, Marines came across the burned-out remains of a U.S. Army convoy that had been ambushed by Saddam Hussein’s forces outside Nasiriyah. In an attempt to rescue the missing soldiers and seize the bridges before the Iraqis could destroy them, the Marines decided to advance their attack on the city by twenty-four hours. What happened next is a gripping and gruesome tale of military blunders, tragedy, and heroism.

Huge M1 tanks leading the attack were rendered ineffective when they became mired in an open sewer. Then a company of Marines took a wrong turn and ended up on a deadly stretch of road where their armored personal carriers were hit by devastating rocket-propelled grenade fire. USAF planes called in for fire support play their own part in the unfolding cataclysm when they accidentally strafed the vehicles. The attempt to rescue the dead and dying stranded in “ambush alley” only drew more Marines into the slaughter.

This was not a battle of modern technology, but a brutal close-quarter urban knife fight that tested the Marines’ resolve and training to the limit. At the heart of the drama were the fifty or so young Marines, most of whom had never been to war, who were embroiled in a battle of epic proportions from which neither their commanders nor the technological might of the U.S. military could save them.

With a novelist’s gift for pace and tension, Tim Pritchard brilliantly captures the chaos, panic, and courage of the fight for Nasiriyah, bringing back in full force the day that a perfunctory task turned into a battle for survival.

Prev: Amber and Clay
Next: Amelia Westlake Was Never Here