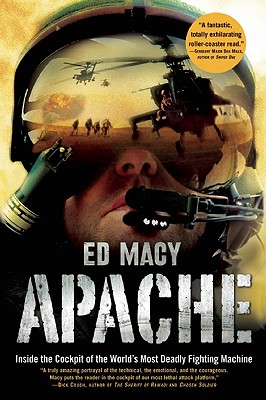 Apache: Inside the Cockpit of the World’s Most Deadly Fighting Machine

Apache is the incredible true story of Ed Macy, a decorated Apache helicopter pilot, that takes you inside the cockpit of the world’s most dangerous war machine. A firsthand account of the exhilaration and ferocity of war, Apache chronicles a rescue mission involving a stranded soldier in Afghanistan in 2007. Ed Macy had always dreamed of a career in the army, so when the British Army Air Corps launched its attack helicopter program, Ed bent every rule in the book to make sure he was the first to sign up to fly the Apache—the deadliest, most technically advanced helicopter in the world and the toughest to fly. In 2007, Ed’s Apache squadron was dispatched to Afghanistan’s notorious Helmand Province with the mission to fight alongside and protect the men on the ground by any means necessary. When a marine goes missing in action, Ed and his team know they are the Army’s only hope of bringing him back alive. Apache is Macy’s story—an adrenalin-fueled account of one of the most daring actions of modern wartime, and a tale of courage, danger, and comradeship you won’t be able to put down.

Prev: Any Resemblance to Actual Persons
Next: Apocalypse Baby