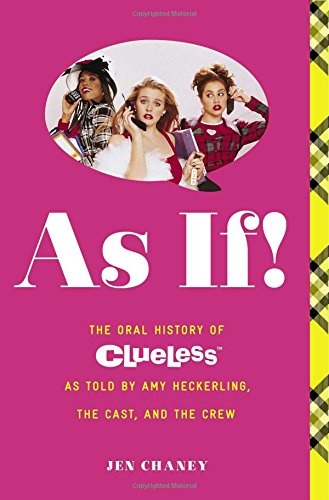 As If! illuminates why plaid skirts and knee socks will never go out of style, and why Clueless remains one of the most beloved comedies of all time.

Acclaimed pop culture journalist Jen Chaney shares an oral history of the cult classic film Clueless in the ultimate written resource about one of the most influential, revered, and enduring movies of the 1990s—in celebration of its twentieth anniversary.

Will we ever get tired of watching Cher navigate Beverly Hills high school and discover true love in the movie Clueless? As if! Written by Amy Heckerling and starring Alicia Silverstone,Clueless is an enduring comedy classic that remains one of the most streamed movies on Netflix, Amazon, and iTunes even twenty years after its release. Inspired by Jane Austen’s Emma,Clueless is an everlasting pop culture staple.

In the first book of its kind, Jen Chaney has compiled an oral history of the making of this iconic film using recollections and insights collected from key cast and crew members involved in the making of this endlessly quotable, ahead-of-its-time production. Get a behind-the-scenes look at how Emmainfluenced Heckerling to write the script, how the stars were cast into each of their roles, what was involved in creating the costumes, sets, and soundtrack, and much more.

This wonderful twentieth anniversary commemoration includes never-before-seen photos, original call sheets, casting notes, and production diary extracts. With supplemental critical insights by the author and other notable movie experts about why Clueless continues to impact pop culture, As If! will leave fans new and old totally buggin’ as they understand why this beloved film is timeless.

Prev: As Husbands Go
Next: As Seen on TV