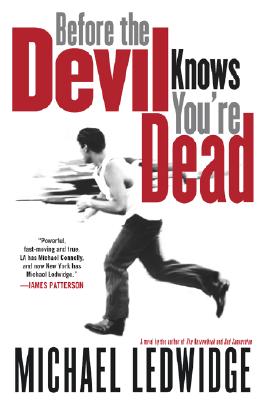 Before the Devil Knows You’re Dead

In the full-throttle, noir-soaked tradition of Dennis Lehane and Michael Connelly, the acclaimed young author of Bad Connection unleashes an ambitious and edgy new thriller pulsating with raw, urban energy.

Decorated NYPD Officer John Coglin always thought his picture on the front page of the newspaper would be one for the scrapbook.

That was before he had the bad luck to be forced into a witness-free, kill-or-be-killed confrontation with a drug-dealing thug. It’s of no help to him that the incident took place during the run-up to a bitter mayoral election campaign, and that his adversary was sixteen years old and black.

Now, instead of another commendation, Coglin is staring down the barrel of a media- and politics-stoked murder rap.

But on the eve of his sure conviction arrives a fateful telephone call.

It’s not the governor, but his long-lost uncle, Aidan O’Connell.

A veteran of the IRA and a recently released guest of San Quentin Penitentiary for armed-to-the-teeth robbery, Aidan offers his nephew a pardon that has nothing to do with lawyers.

Coglin is about to find out that the type of amnesty Uncle Aidan is proposing is the kind that involves a beautiful but dangerous Mafia widow, a car trunk full of M-16s, and thirty million dollars in jewels smack dab in the middle of Rockefeller Center.

Before the Devil Knows You’re Dead is a highly entertaining, deliciously gritty, super-fast thriller that takes us on a cutthroat ride into an urban realm where criminal intent collides head-on with the vagaries of fate and the inscrutabilities of the human heart.

Prev: Before I Fall
Next: Before the End, After the Beginning