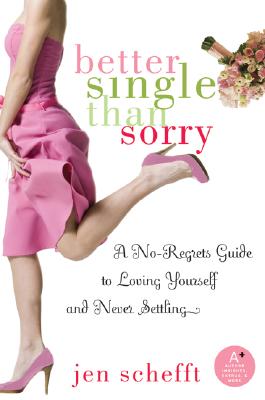 Better Single Than Sorry: A No-Regrets Guide to Loving Yourself and Never Settling

Advice, insight, and inspiration for relishing the single life!

We live in a country that places an unhealthy emphasis on relationships, yet nearly 50 percent of all American women are single. But does being alone mean you have to be lonely and miserable? Absolutely not.

Nobody knows that better than Jen Schefft, who got engaged to a rich and handsome man on TV’s The Bachelor, only to break it off after six months—and who later stunned and infuriated viewers nationwide when she turned down the proposals of both finalists on The Bachelorette the following year. But even though she was reviled in the tabloid press and on the Internet, Jen believes it would be a far worse fate to commit to a relationship that was wrong for her.

Better Single Than Sorry is an indispensable guide to thriving as a solo in a couples-obsessed culture. In this warm, compassionate, down-to-earth, and empowering book, Jen Schefft has a positive message to impart to millions of sensational single women: Love yourself . . . and never settle for anything less than everything you deserve.

Prev: Better Off Dead
Next: Between The Bliss And Me