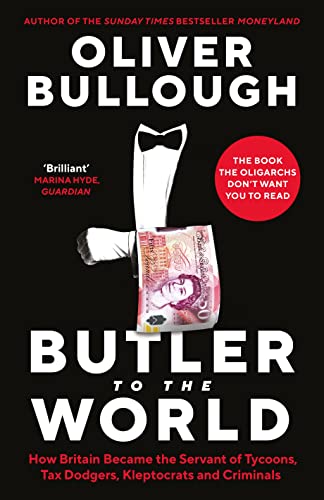 In his forceful follow-up to Moneyland, Oliver Bullough unravels the dark secret of how Britain placed itself at the center of the global offshore economy and at the service of the worst people in the world.

Butler To The World

How Britain Helps the World's Worst People Launder Money, Commit Crimes, and Get Away with Anything

The Suez Crisis of 1956 was the nadir of Britain’s twentieth century, the moment when the once-superpower was bullied into retreat. “Great Britain has lost an empire and not yet found a role,” said Dean Acherson, a former US secretary of state. Acheson’s line has entered into the canon of great quotations: but it was wrong. Britain had already found a role. The leaders of the world just hadn’t noticed it yet.

Butler to the World reveals how Britain came to assume its role as the center of the offshore economy. Written polemically, but studded with witty references to the butlers of popular fiction, it demonstrates how so many elements of modern Britain have been put at the service of the world’s oligarchs.

The Biden administration is putting corruption at the heart of its foreign policy, and that means it needs to confront Britain’s role as the foremost enabler of financial crime and ill behavior. This book lays bare how London has deliberately undercut U.S. regulations for decades, and calls into question the extent to which Britain can be considered a reliable ally.