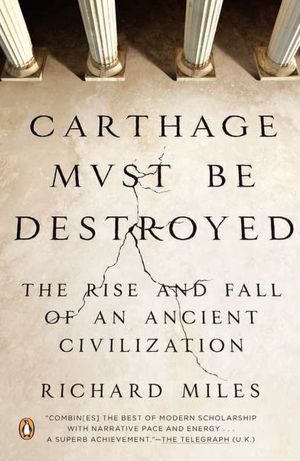 Carthage Must Be Destroyed

The Rise and Fall of an Ancient Civilization

Drawing on a wealth of new research, archaeologist, historian, and master storyteller Richard Miles resurrects the civilization that ancient Rome struggled so mightily to expunge. This monumental work charts the entirety of Carthage’s history, from its origins among the Phoenician settlements of Lebanon to its apotheosis as a Mediterranean empire whose epic land-and-sea clash with Rome made a legend of Hannibal and shaped the course of Western history. Carthage Must Be Destroyed reintroduces readers to the ancient glory of a lost people and their generations-long struggle against an implacable enemy.

Prev: Carpe Diem: Put a Little Latin in Your Life
Next: Carved in Sand