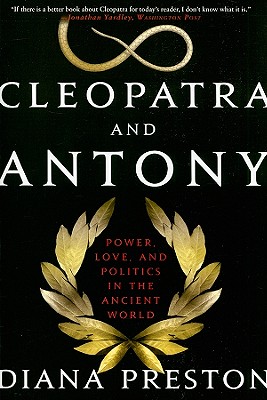 On a stiflingly hot day in August, 30 B.C., the thirty-nine-year-old Queen of Egypt, Cleopatra, took her own life, rather than be paraded in chains through Rome by her conqueror, Octavian, the future emperor Augustus. A few days earlier, her lover of eleven years, Mark Antony, had died in her arms following his own botched suicide attempt. Oceans of mythology have grown up around them, all of which Diana Preston puts to rest in her stirring history of the lives and times of a couple whose names—more than two millennia later—still invoke passion, curiosity, and intrigue.

This book sets the romance and tragedy of Antony and Cleopatra’s personal lives within the context of their political times. There are many contemporary resonances: the relationship between East and West and the nature of empire, the concealment of personal ambition beneath the watchword of liberty, documents forged, edited or disposed of, special relationships established, constitutional forms and legal niceties invoked when it suited. Indeed their lives and deaths had deep political ramifications, and they offer a revealing perspective on a tipping point in Roman politics and on the consolidation of the Roman Empire. Three hundred years would pass before the east would, with the rise of Constantinople and the Byzantine Empire, once again take a share of political power in the Mediterranean. In an intriguing postscript, Preston speculates on what might have happened had Antony and Cleopatra defeated Octavian at the Battle of Actium in 31 B.C.