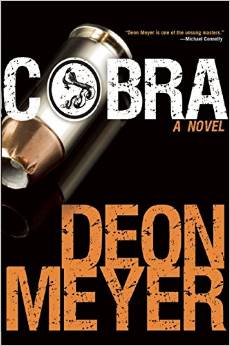 Celebrated as the “King of South African crime,” Deon Meyer is a world-class writer whose page-turning thrillers probe the social and racial complexities of his native country. In his latest novel, the bodies of three people are found at an exclusive guest house in the beautiful Franschhoek wine valley. Two of them were professional bodyguards, but the British citizen they were meant to be protecting is nowhere to be found; left behind are his brand new passport, new suitcase, and new clothes. And the spent shell cases bear a chilling engraving: the flaring head of a spitting cobra.

Meanwhile, in Cape Town, a skilled pickpocket is using his considerable talents to put his younger sister through school. But one day he is caught in the act. Security guards begin to question him, only to be killed with consummate ease by a stranger who leaves behind the distinctive shell cases.

With the help of his colleagues, Detective Benny Griessel rushes to untangle a case that only grows more complex. The British man’s passport turns out to be a fake, but the British consulate is decidedly unhelpful. And then the pickpocket’s sister is abducted. From Cape Town’s famous waterfront to a deadly showdown on a suburban train, Cobra hurtles towards a shocking finale—and someone may not make it out alive.