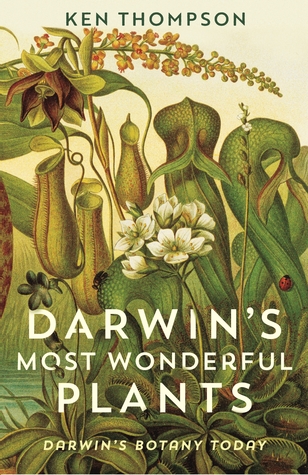 A Tour of His Botanical Legacy

For many people, the story of Charles Darwin goes like this: he ventured to the Galapagos Islands on the Beagle, was inspired by the biodiversity of the birds he saw there, and immediately returned home to write his theory of evolution. But this simplified narrative is inaccurate and lacking: it leaves out a major part of Darwin’s legacy. He published On the Origin of Species nearly thirty years after his voyages. And much of his life was spent experimenting with and observing plants.

Darwin was a brilliant and revolutionary botanist whose observations and theories were far ahead of his time. With Darwin’s Most Wonderful Plants, biologist and gardening expert Ken Thompson restores this important aspect of Darwin’s biography while also delighting in the botanical world that captivated the famous scientist. Thompson traces how well Darwin’s discoveries have held up, revealing that many are remarkably long-lasting. Some findings are only now being confirmed and extended by high-tech modern research, while some have been corrected through recent analysis.

We learn from Thompson how Darwin used plants to shape his most famous theory and then later how he used that theory to further push the boundaries of botanical knowledge. We also get to look over Darwin’s shoulder as he labors, learning more about his approach to research and his astonishing capacity for hard work. Darwin’s genius was to see the wonder and the significance in the ordinary and mundane, in the things that most people wouldn’t look at twice.
Both Thompson and Darwin share a love for our most wonderful plants and the remarkable secrets they can unlock. This book will instill that same joy in casual gardeners and botany aficionados alike.