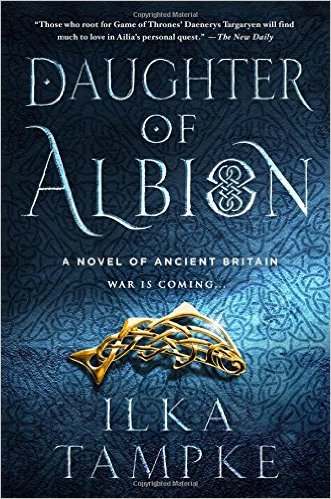 Daughter of Albion is a suspenseful and richly rewarding novel about women, about power, about love, and about the clash of cultures and the tenacity of belief.

A Novel of Ancient Britain

Set in Ancient Britain on the cusp of Roman invasion, Ilka Tampke’s Daughter of Albion is a mesmerizing novel about the collision of two worlds and a young woman torn between two men.

Daughter of Albion transports the reader to the village of Caer Cad in southwest Britain, AD 43, where the dark cloud of the Roman Empire is gathering on the horizon.

A baby girl is abandoned on the doorstep of the Tribequeen’s kitchen. Cookmother takes her in and names her Ailia.Without family, Ailia is an outsider in her village, forbidden from marriage and excluded from learning. Despite this, she grows up an intelligent and brave young woman, serving the Tribequeen of her township until the day when an encounter with an enigmatic man named Taliesin leads Ailia to the Mothers, the tribal ancestors, who have chosen her for another path.

Ailia’s growing awareness of her future role as the tribal protector and her relationships with the two very different men she loves will be utterly tested by the imminent threat of Emperor Claudius preparing to take the island.

With an incredibly compelling heroine, Daughter of Albion is a suspenseful and richly rewarding novel about women, about power, about love, and about the clash of cultures and the tenacity of belief.

Prev: Darwin's Most Wonderful Plants
Next: Daughters of the Winter Queen