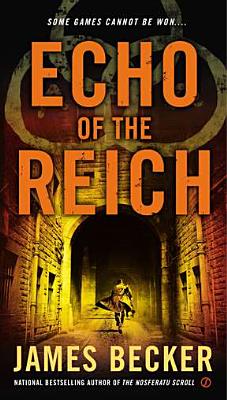 Echo of the Reich

Chris Bronson is back in this edge-of-your-seat thriller involving a secret Nazi WW2 weapon and a plot against the 2012 London Olympics.

Berlin, 1936: Hitler is determined to hold the best Olympic Games the world has ever seen. German athletes have trained full-time to ensure that ‘Aryans’ take all the top honours. Unfortunately, the African-American Jesse Owens spoils their plan, winning four gold medals. In a secret Nazi underground laboratory, scientists are at work on a devastating revenge.

London, 2012: Chris Bronson is working undercover for the Metropolitan Police, infiltrating a group of anarchists who have been smashing windows, sabotaging machinery and even digging tunnels under some of the Olympic sites in attempts to disrupt the Games. But he uncovers a plot that hints at a much more sinister plan and will lead him on a chase into the dark corners of German’s Nazi past.

This is the fifth novel in the bestselling series featuring police detective Chris Bronson and archaeologist Angela Lewis, which combines historical detail with fast-paced action.

Prev: Eats, Shoots, and Leaves
Next: Echoes of Memory