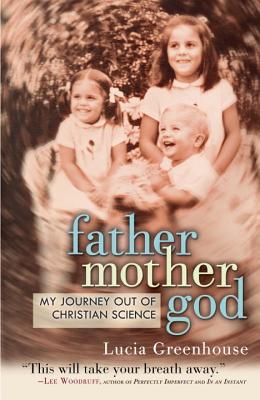 Lucia Ewing had what looked like an all-American childhood. She lived with her mother, father, sister, and brother in an affluent suburb of Minneapolis, where they enjoyed private schools, sleep-away camps, a country club membership, and skiing vacations. Surrounded by a tight-knit extended family, and doted upon by her parents, Lucia had no doubt she was loved and cared for. But when it came to accidents and illnesses, Lucia’s parents didn’t take their kids to the doctor’s office—they prayed, and called a Christian Science practitioner.

fathermothergod is Lucia Greenhouse’s story about growing up in Christian Science, in a house where you could not be sick, because you were perfect; where no medicine, even aspirin, was allowed. As a teenager, her visit to an ophthalmologist created a family crisis. She was a sophomore in college before she had her first annual physical. And in December 1985, when Lucia and her siblings, by then young adults, discovered that their mother was sick, they came face-to-face with the reality that they had few—if any—options to save her. Powerless as they watched their mother’s agonizing suffering, Lucia and her siblings struggled with their own grief, anger, and confusion, facing scrutiny from the doctors to whom their parents finally allowed them to turn, and stinging rebuke from relatives who didn’t share their parents’ religious values.

In this haunting, beautifully written book, Lucia pulls back the curtain on the Christian Science faith and chronicles its complicated legacy for her family. At once an essentially American coming-of-age story and a glimpse into the practices of a religion few really understand, fathermothergod is an unflinching exploration of personal loss and the boundaries of family and faith.