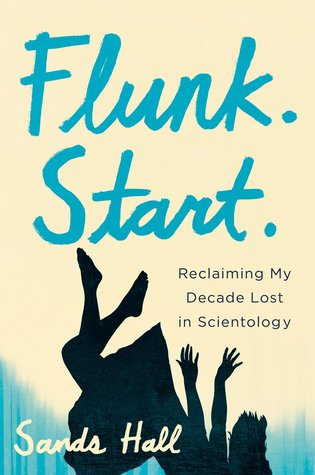 Reclaiming My Decade Lost in Scientology

In Flunk. Start., Sands Hall chronicles her slow yet willing absorption into the Church of Scientology. Her time in the Church, the 1980s, includes the secretive illness and death of its founder, L. Ron Hubbard, and the ascension of David Miscavige. Hall compellingly reveals what drew her into the religion―what she found intriguing and useful―and how she came to confront its darker sides.

As a young woman from a literary family striving to forge her own way as an artist, Hall ricochets between the worlds of Shakespeare, avant-garde theater, and soap opera, until her brilliant elder brother, playwright Oakley Hall III, falls from a bridge and suffers permanent brain damage. In the secluded canyons of Hollywood, she finds herself increasingly drawn toward the certainty that Scientology appears to offer.

In this candid and nuanced memoir, Hall recounts her spiritual and artistic journey with a visceral affection for language, delighting in the way words can create a shared world. However, as Hall begins to grasp how purposefully Hubbard has created the unique language of Scientology―in the process isolating and indoctrinating its practitioners―she confronts how language can also be used as a tool of authoritarianism.

Hall is a captivating guide, and Flunk. Start. explores how she has found meaning and purpose within that decade that for so long she thought of as lost; how she has faced the “flunk” represented by those years, and has embraced a way to “start” anew.

Prev: Flung Out of Space
Next: Following Fish