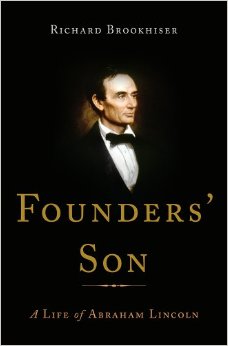 A Life of Abraham Lincoln

In Founders’ Son, Richard Brookhiser brings Abraham Lincoln’s career and mind to thrilling life, showing how a frontier boy became the most influential man of his era. The key was the founding fathers, from whom Lincoln derived a vision of America that would become instrumental in his handling the Civil War and the question of slavery.

Lawyer, congressman, president—Brookhiser traces the trajectory of Lincoln’s career, revealing how he won arguments in the courtroom and on the stump. Depressive, reader, poet—Brookhiser shows us Lincoln in private, finding solace in Byron and Euclid. But it was the founders who he turned to for guidance. Seeing himself as a defender of their legacy, Lincoln steered the nation toward a righteous cause, finishing the grand experiment in liberty begun by Washington, Paine, and Jefferson. Astonishing in its insight and elegant in its prose, this book forces us to think anew about the first hundred years of American history, and shows how we can, like Lincoln, engage with the founders ourselves.

Prev: Fortune's Favors
Next: Four Nights with the Duke