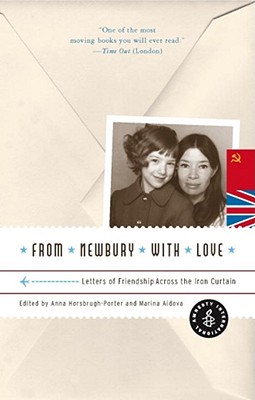 From Newbury, With Love

In 1971 a retired English bookseller joined an Amnesty International campaign to write letters to children of political prisoners. He chose seven-year-old Marina Aidova because her birthday was one day before his, and he had always loved Russia and its literature. His postcard was signed, “With love from Newbury, Berks, England.” Marina, whose father was in one of the harshest Soviet prison camps, wrote back: “I am a first class schoolgirl. I learn ballet and study English. And what are you?”

So began a correspondence that changed their lives. For the next fifteen years they exchanged letters, telegrams, magazines, and books . . . while a profound affection grew. Marina and her mother drew great strength from the exchange-it was a lifeline to another, more hopeful world. Through Harold’s encouragement, Marina was inspired to study English at university, and eventually went on to work as an English translator.

Published in association with Amnesty International, the families’ correspondence-along with over thirty photos they exchanged-is collected here, making for a moving look at the powerful influence one family can have on another in need, halfway around the world.

Prev: From Here to Maternity
Next: From the Charred Remains