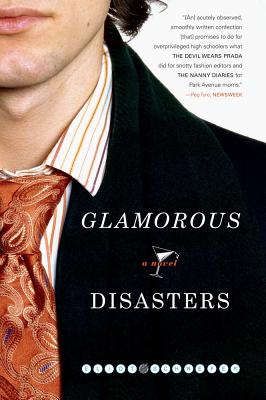 Noah rose from humble beginnings and, through pure grit and resourcefulness, got himself through Princeton. Now staggering under the weight of massive student loans and dazzled by life in the big city, Noah enters the rarefied field of SAT tutoring in Manhattan, working one-on-one with the spoiled, gorgeous children of the American aristocracy.

He takes on the considerable academic challenges that are Dylan Thayer, a dissipated high school athlete-socialite, and his waifish sister, Tuscany. Dylan won’t lift a finger to do anything but pick up a lacrosse stick, and Tuscany is avidly pursuing her own downfall via drugs and relationships with men more than twice her age. But their mother, a self-medicating pediatrician, has ambitious plans for them in spite of their shortcomings—and she has plans for their SAT tutor as well.

With echoes of The Devil Wears Prada, The Nanny Diaries, and Bright Lights, Big City, Glamorous Disasters is an incisive portrayal of a small and privileged world, a cautionary tale written by a Harvard grad who was once an SAT tutor himself—an outsider who became a magnificently observant insider.