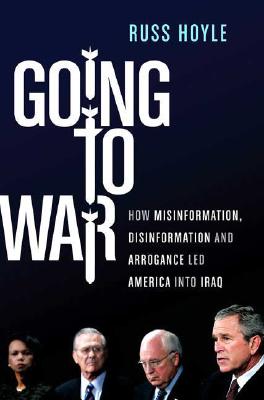 With the pacing and intrigue of a thriller, Going to War is the fullest, most detailed account yet of the U.S.-led march to war in Iraq. Veteran editor and reporter Russ Hoyle has pieced together the whole complicated story, from the Bush administration’s aggressive twisting of intelligence about Saddam Hussein’s alleged weapons of mass destruction (WMD) to its manipulation of Congress and a compliant media in order to “sell” the war to a frightened nation.

Hoyle takes us inside the White House and intelligence agencies, where we witness internal debates that took place within the Oval Office, the Office of the Vice President, the Pentagon, and the CIA after 9/11 and in the months leading up to the war. He describes the furtive steps of the White House Iraq Group—including Condoleezza Rice, Karl Rove, Scooter Libby, Karen Hughes, and their militant neoconservative enablers—who maneuvered with Vice President Cheney to promote unfounded intelligence about Iraqi WMD and pressure the CIA to tailor its analysis to fit President Bush’s war policy.

We also learn about the propaganda campaign waged by Iraqi exile leader Ahmed Chalabi and the Iraqi National Congress; Tony Blair’s role in pushing the White House to use Saddam’s WMD as a rationale for war, as revealed in classified British government documents; the behind-the-scenes story of Colin Powell’s televised presentation to the United Nations in the months before the U.S.-led attack; the truth behind the Niger yellowcake affair and the administration’s vendetta against Ambassador Joseph Wilson in leaking the identity of his wife, Valerie Plame Wilson, as a covert CIA agent; and the grand jury investigation that led to the dramatic jailing of New York Times reporter Judith Miller and the conviction of Cheney’s chief of staff, Scooter Libby.

This is the most definitive and comprehensive portrayal to date of the forces that led us into Iraq. Hoyle helps us understand how the American public was deceived and dragged into a war whose end is nowhere in sight. Going to War tells a story that is destined to join the ranks of the great follies of U.S. diplomatic and political history.