“Some books explain a problem, this book gives you an entire world view. Greedy Bastards, puts everything in context and makes the enormity and entirety of our crises understandable. Dylan, as always, is incisive, sharp and pointed.” 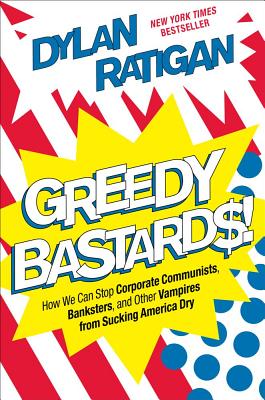 Dylan Ratigan is mad as hell. Infuriated by government corruption and corporate communism, incensed by banksters shaking down taxpayers, and despairing of an ailing health care system, an age-old dependency on foreign oil, and a failing educational system, Ratigan sees an America that has allowed itself to be swindled and robbed. In this book, his first, he rips the lid off our deeply crooked system—and offers a way out. This country, now more than ever, needs passionate debate and smart policy, a brazen willingness to scrap what doesn’t work, and the entrepreneurial spirit to try what does. Ratigan has compiled brash and fresh solutions for building a new and better America, and with this book he has started the debate America deserves.

With you, he wants to take back the country from the six vampires sucking this nation dry:

• A political system in which lobbyists write legislation, lawmakers place “secret holds” to create more pork for their districts, and money drives the whole process.

• A banking system that uses capital for speculation and debt creation, rather than productive investment.

• A “master-slave” relationship with our Chinese bankers, making our corporations and politicians complicit in a system that rigs our currency and leaves us with permanent joblessness and massive trade deficits.

• A health care system that is among the priciest and least sustainable in the industrialized world.

• An educational system that prizes prestige but produces mediocrity.

• An addiction to foreign oil that has sapped us of our willingness to innovate, made us reliant on inefficient technologies, and left us supportive of corrupt governments.

To combat these vampires and to isolate the systematic ways in which our once productive industries and our government have been breached, Ratigan does not offer a grab bag of flimsy suggestions or useless hot air. Instead he provides readers with a set of values that together form the answer for how each of us can not only understand what has gone wrong—but join together to make it right.