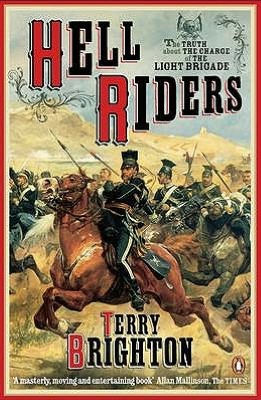 The True Story of the Charge of the Light Brigade

In October 1854, with the Crimean War just under way and British and French troops pushing the tsar’s forces back from the Black Sea, seven hundred intrepid English horsemen charged a mile and a half into the most heavily fortified Russian position. In the seven minutes it took the cavalry to cross this distance, more than five hundred of them were killed. Celebrated in poetry and legend, the charge of the Light Brigade has stood for a century and a half as a pure example of military dash and daring. Until now, historical accounts of this cavalry charge have relied upon politically motivated press reports and diaries kept by the aristocratic British generals who commanded the action.

In Hell Riders, noted historian and Crimean War expert Terry Brighton looks, for the first time, to the journals recorded by survivors-the soldiers who did the fighting. His riveting firsthand narrative reveals the tragically inept leadership on the part of the British commander in chief, Lord Raglan, whose orders for the charge were poorly communicated and misinterpreted, and an unfathomable indifference on the part of British officers to the men who survived the battle and were left to tend their wounds and bury the dead in the freezing cold. While the charge overran the Russians, it gained nothing and the war continued for another two years. In finally capturing the truth behind the charge of the Light Brigade, Brighton offers a stirring portrait of incredible bravery in the service of a misguided endeavor.

Prev: Hell and Gone
Next: Hell to Pay