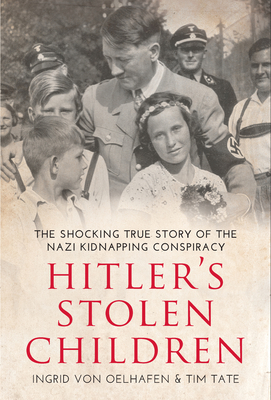 The Shocking True Story of the Nazi Kidnapping Conspiracy

Hitler’s Stolen Children is a powerful, first-person account of being at the heart of one of the Nazi’s cruelest and most obscene experiments—the Lebensborn program to create a new Aryan master race. In 1942, when she was nine months old, Erika Matko was stolen from her family in St. Sauerbrunn in what was then Yugoslavia and transported to Germany to be “Germanized.” She was chosen because, unlike her older brother and sister, she was blond and blue eyed, and had passed a medical racial examination that classed her as Aryan. Lebensborn then farmed her out to politically vetted German foster parents. Renamed Ingrid von Oelhafen, she grew up believing she was German. Then, one day, friends of her foster family revealed the truth about her origins. This was the beginning of a life-long quest to discover the truth about her birth and the Lebensborn program. It was a journey that would take her across Germany, uncovering the terrible secrets of Lebensborn—including the kidnapping of up to half a million babies like her and the deliberate murder of those deemed “sub-standard”—and back to the village where she was born. But here she would be faced with something even more painful: a woman who for more than seventy years had been using her name—and living her life.

Prev: Hitler's Pawn: The Boy Assassin and the Holocaust
Next: Hollow