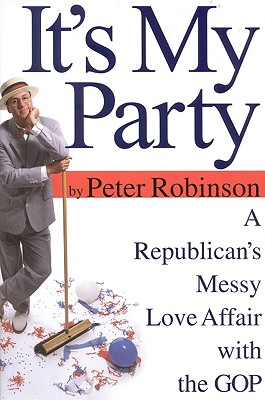 Peter Robinson has Republican parents and grew up in a Republican neighborhood. In college he helped found the notorious Dartmouth Review and infuriated dons at Oxford by revealing an enthusiasm for Margaret Thatcher. He returned to the United States to accept a position as a speechwriter in the White House of both Reagan and Bush. Nevertheless, this inveterate political insider has come forward with a no-holds-barred, honest appraisal of the party that owns his heart. In a political book with attitude, Robinson shares his sometimes angry, sometimes befuddled, sometimes downright amused perspective on the most pressing questions facing the party and the voting public. It’s My Party promises to be one of the year’s most entertaining and perceptive looks at America’s political battlefield.

Prev: It's My Birthday, Too!
Next: It’s Kind Of A Cheesy Love Story