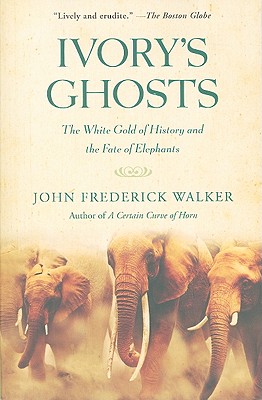 Long before gold and gemstones held allure, humans were drawn to the “jewels of the elephant”—its great tusks—for their beauty, rarity, and ability to be finely carved. In Ivory’s Ghosts, John Frederick Walker tells the astonishing story of the human lust for ivory and its cataclysmic implications for elephants. Each age and each culture, from ancient Egypt to nineteenth-century America and modern Japan, found its own artistic, religious, and even industrial uses for the remarkable material that comes from the teeth of elephants and a handful of other mammals. Sensuous figurines, scientific instruments, pistol grips, and piano keys were all the result—as was human enslavement and the wholesale slaughter of elephants. By the 1980s, elephant poaching threatened the last great herds of the African continent and led to a worldwide ban on international trade. But the ban has failed to stop poaching, and debate continues over what to do with the legitimate and growing stockpiles of ivory recovered from elephants that die of natural causes. An insightful history of this precious commodity, Ivory’s Ghosts is also a wrenching—and utterly compelling—argument for a controversial mode of wildlife conservation: a controlled return to the ivory trade.