“Blechman describes this brave new world with determined good humor and considerable bemusement. He clearly disapproves of the whole thing, but accepts that for most residents living in these conditions is the fulfillment of a dream.”

— Katherine A. Powers The Boston Globe on Leisureville 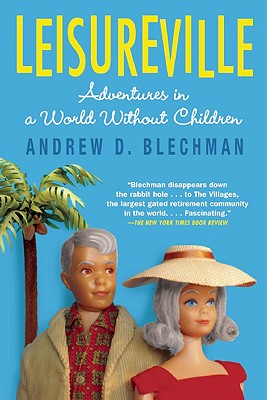 When his next-door neighbors in a quaint New England town suddenly pick up and move to a gated retired community in Florida called The Villages, Andrew Blechman is astonished by their stories, so he goes to investigate. Larger than Manhattan, with a golf course for every day of the month, two downtowns, its own newspaper, radio, and TV station, The Villages is a city of nearly one hundred thousand (and growing) missing only one thing: children. In the critically acclaimedLeisureville, Blechman delves into life in the senior utopia, offering a hilarious firsthand report on everything from ersatz nostalgia to the residents’ surprisingly active sex life. But this is more than just a romp through a retirement paradise; Blechman traces the history of the age-segregated retirement phenomenon, and travels to Arizona to show what has happened to the pioneering developments after decades of segregation. A fascinating blend of serious history, social commentary, and hilarious, engaging reportage,Leisurevilleis an important book on a major, underreported trend.

Prev: Legend of a Suicide
Next: Lenin, Stalin, and Hitler: The Age of Social Catastrophe