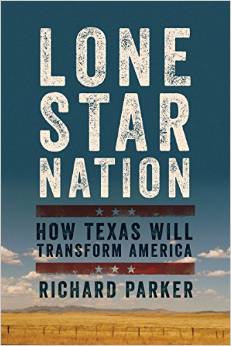 How Texas Will Transform America

A provocative and eye-opening look at the most explosive and controversial state in America, where everything is bigger, bolder—and shaping our nation’s future in surprising ways

To most Americans, Texas has been that love-it-or-hate it slice of the country that has sparked controversy, bred presidents, and fomented turmoil from the American Civil War to George W. Bush. But that Texas is changing—and it will change America itself.

Richard Parker takes the reader on a tour across today’s booming Texas, an evolving landscape that is densely urban, overwhelmingly Hispanic, exceedingly powerful in the global economy, and increasingly liberal. This Texas will have to ensure upward mobility, reinvigorate democratic rights, and confront climate change—just to continue its historic economic boom. This is not the Texas of George W. Bush or Rick Perry.

Instead, this is a Texas that will remake the American experience in the twenty-first century—as California did in the twentieth—with surprising economic, political, and social consequences. Along the way, Parker analyzes the powerful, interviews the insightful, and tells the story of everyday people because, after all, one in ten Americans in this century will call Texas something else: Home.