“A soundly researched history of an event worth remembering…A book worth having and referring to when contemplating the critical postwar years of the Palestine Mandate.” 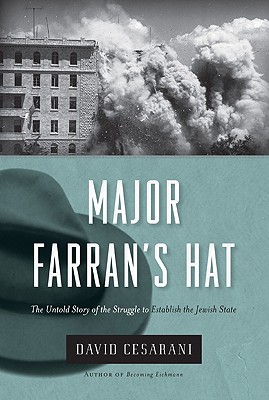 In May 1947 a sixteen-year-old Jewish activist named Alexander Rubowitz was abducted in broad daylight from the streets of Jerusalem. At the abduction scene, a gray hat was found, purportedly belonging to Major Roy Farran, a decorated World War II officer who was in charge of British counterterrorism in Palestine. As evidence mounted against Farran, the Zionist underground swore vengeance. The episode precipitated a series of nail-biting twists and turns that had far-reaching consequences. An engaging mix of true crime and polemical narrative history, peopled by a cast of luminaries including Field Marshal Bernard Montgomery, Menachem Begin, and Golda Meir, Major Farran’s Hat investigates shady violence, scandaluos cover-ups, and political expediency. It also explores why Britain lost Palestine, as well as how its counterinsurgency and diplomatic strategies collided so disastrously. By exposing Britain’s legacy in the Middle East, this historical thriller echoes today’s war on terror and pointedly illustrates the circumstances surrounding the birth of the State of Israel.