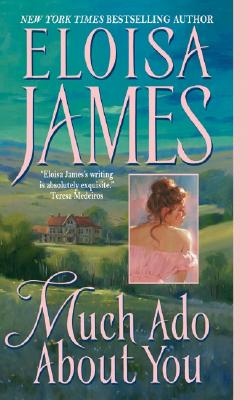 Much Ado About You

When you’re the oldest daughter, you don’t get to have any fun!

Witty, orphaned Tess Essex faces her duty: marry well and marry quickly, so she can arrange matches for her three sisters—beautiful Annabel, romantic Imogen and practical Josie. After all, right now they’re under the rather awkward guardianship of the perpetually tipsy Duke of Holbrook. But just when she begins to think that all might end well, one of her sisters bolts with a horse-mad young lord, and her own fiancÃ© just plain runs away.

Which leaves Tess contemplating marriage to the sort of man she wishes to avoid—one of London’s most infamous rakes. Lucius Felton is a rogue whose own mother considers him irredeemable! He’s delicious, Annabel points out. And he’s rich, Josie notes. But although Tess finally consents to marry him, it may be for the worst reason of all. Absurd as she knows it to be, she may have fallen utterly in love . . . When you’re the oldest daughter, you don’t get to have any fun!