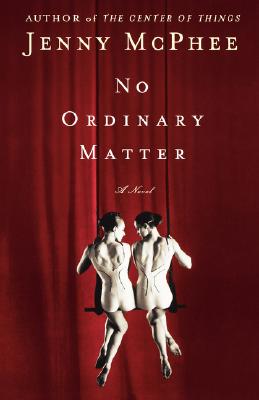 Jenny McPhee’s critically acclaimed debut, The Center of Things, was hailed by O, The Oprah Magazine as “a smart novel of love, lust, and life’s miraculous randomness.” The New York Times Book Review called it “an engaging novel about big ideas.” In her delightful new novel, No Ordinary Matter, McPhee turns her razor-sharp pen on the offbeat worlds of soap operas, mistaken identities, private detectives, and sibling rivalries as she deftly navigates the territory between coincidence and fate.

Veronica Moore writes for a daytime drama while secretly composing a musical and has fallen in love with Alex Drake, who plays a neurologist on her show. Lillian Moore is a neurologist who is pregnant from a one-night stand. Veronica and Lillian have hired Brian Byrd, P. I., to uncover the mystery surrounding their father’s death. Before they know it, unexpected answers come crawling out of the woodwork. The sisters meet monthly at the Hungarian Pastry Shop, where they entangle their futures and unravel their pasts, setting the stage for a series of revelations that will change the course of everyone’s lives. This fast-paced narrative is full of situations worthy of the steamiest of soaps, and yet McPhee renders this fantastical world delightfully ordinary.

No Ordinary Matter is as addictive as a soap opera, as high-kicking as a Broadway show, as insightful as an MRI, and as satisfying as a buttery croissant. With its sly charm and witty sophistication, McPhee’s new novel is another sparkling gem from a rising literary star.

Prev: No Ordinary Joes
Next: No Other World