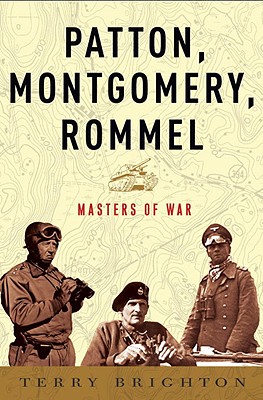 In Patton, Montgomery, Rommel, one of Britain’s most accomplished military scholars presents an unprecedented study of the land war in the North African and European theaters, as well as their chief commanders—three men who also happened to be the most compelling dramatis personae of World War II.

Beyond spellbinding depictions of pivotal confrontations at El Alamein, Monte Cassino, and the Ardennes forest, author-scholar Terry Brighton illuminates the personal motivations and historical events that propelled the three men’s careers: how Patton’s, Montgomery’s, and Rommel’s Great War experiences helped to mold their style of command—and how, exactly, they managed to apply their arguably megalomaniacal personalities (and hitherto unrecognized political acumen and tact) to advance their careers and strategic vision.

Opening new avenues of inquiry into the lives and careers of three men widely profiled by scholars and popular historians alike, Brighton definitively answers numerous lingering and controversial questions: Was Patton really as vainglorious in real life as he was portrayed to be on the silver screen?—and how did his tireless advocacy of “mechanized cavalry” forever change the face of war? Was Monty’s dogged publicity-seeking driven by his own need for recognition or by his desire to claim for Britain a leadership role in postwar global order?—and how did this prickly “commoner” manage to earn affection and esteem from enlisted men and nobility alike? How might the war have ended if Rommel had had more tanks?—and what fundamental philosophical difference between him and Hitler made such an outcome virtually impossible?

Abetted by new primary source material and animated by Terry Brighton’s incomparable storytelling gifts, Patton, Montgomery, Rommel offers critical new interpretations of the Second World War as it was experienced by its three most flamboyant, controversial, and influential commanders—and augments our understanding of each of their perceptions of war and leadership.