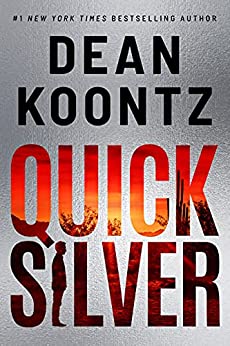 #1 New York Times bestselling master of suspense Dean Koontz takes a surprising and exhilarating road trip with a man in pursuit of his strange past―mile by frightening mile.

Quinn Quicksilver was born a mystery―abandoned at three days old on a desert highway in Arizona. Raised in an orphanage, never knowing his parents, Quinn had a happy if unexceptional life. Until the day of “strange magnetism.” It compelled him to drive out to the middle of nowhere. It helped him find a coin worth a lot of money. And it practically saved his life when two government agents showed up in the diner in pursuit of him. Now Quinn is on the run from those agents and who knows what else, fleeing for his life.

During a shoot-out at a forlorn dude ranch, he finally meets his destined companions: Bridget Rainking, a beauty as gifted in foresight as she is with firearms, and her grandpa Sparky, a romance novelist with an unusual past. Bridget knows what it’s like to be Quinn. She’s hunted, too. The only way to stay alive is to keep moving.

Barreling through the Sonoran Desert, the formidable trio is impelled by that same inexplicable magnetism toward the inevitable. With every deeply disturbing mile, something sinister is in the rearview―an enemy that is more than a match for Quinn. Even as he discovers within himself resources that are every bit as scary.

Prev: Quicksands: A Memoir
Next: Quiet