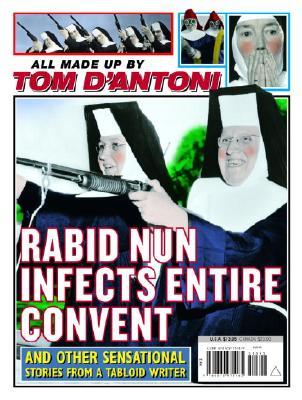 “Some people aspire to greatness. A combination of bad parenting and coming of age in Baltimore, Maryland, at the same time as John Waters pushed me in a different direction,” writes Tom D’Antoni. After fifteen years as a journalist and broadcaster-fifteen years of going after sources and double- and triple-checking facts-D’Antoni was seduced by the dark side: a national supermarket tabloid. When he realized he could entirely make up stories and then quote people he’d just invented-and get paid (poorly) for it-he was hooked.

In Rabid Nun Infects Entire Convent, D’Antoni resurrects his favorite stories and reveals the (often sick) thoughts that inspired them. From the mild “Newborn Baby Sings Like Elvis” and “Denture Bandit Steals False Teeth from the Mouths of Victims” to the truly twisted, such as “Grandma Turns Pet Dog Inside Out Looking for Lost Lottery Ticket,” “Bag Lady’s B.O. Kills Five People on Bus,” and “Cult Uses Human Heads for Bowling Balls,” they all came straight from D’Antoni’s imagination.

Prev: R is for Rebel
Next: Radical