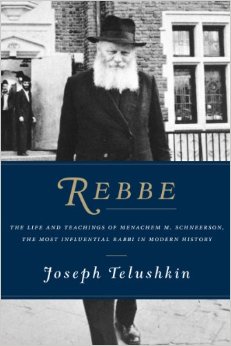 The Life and Teachings of Menachem M. Schneerson, the Most Influential Rabbi in Modern History

The inspiring story of the prominent yet deeply modest leader who rebuilt a dwindling post-holocaust community into the most influential Jewish organization in the world, the late Rebbe Menachem Mendel Schneerson.

From a small synagogue In Crown Heights, Brooklyn, the late Rebbe Schneerson impacted the policies of U.S. presidents and politicians, counseled some of our greatest thinkers, and spread his teachings of love and righteousness to the far corners of the world. An ambassador for Jews globally, his role was unprecedented within a fragmented religion, comprised of diverse, often divided, sects. Many Jews—especially those involved in Chabad—believed that the Rebbe was the messiah while he was still alive.

Drawn from the Rebbe’s private correspondence, Rebbe is a rich and illuminating portrait of this remarkable man who was a devoted spiritual leader and tireless counselor; controversial advocate for women’s rights and community openness; and an accomplished scholar fluent in dozens of languages. Joseph Telushkin illuminates the Rebbe’s rich private life and chronicles his achievements, from his close bond with his congregants to his influence on presidents, including Jimmy Carter and Ronald Reagan. Throughout, Telushkin pays tribute to the Rebbe’s legacy—his teachings, of love, education, and respect—which have become engrained in millions of Jews and non-Jews alike.