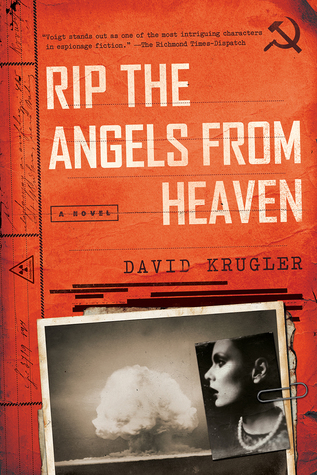 Rip the Angels from Heaven

Intelligence officer Ellis Voigt fights to prevent the Soviets from infiltrating the Manhattan Project while running from enemies on both sides, in the thrilling sequel to The Dead Don’t Bleed.

Lieutenant Ellis Voigt of the Office of Naval Intelligence is desperate to keep the secrets that threaten his life. The war overseas is going well for America, but Voigt can’t escape a web of double-agents and undercover spies who follow his every move.

The FBI suspects that he is the communist who murdered a Naval officer in a Washington back alley. The Soviets believe he’s holding back information from their contacts, and they’re willing to use any means necessary to extract it.

When Voigt is sent to New Mexico on a secret mission to identify a Soviet spy, he is tailed by both the FBI and the Russians, and is running out of people he can trust. As the team at Los Alamos prepares to test an atomic bomb in the desert, Voigt faces the dilemma he’d been trying to avoid: he can stop the Soviets from getting the bomb or he can save himself―but he might not be able to do both.