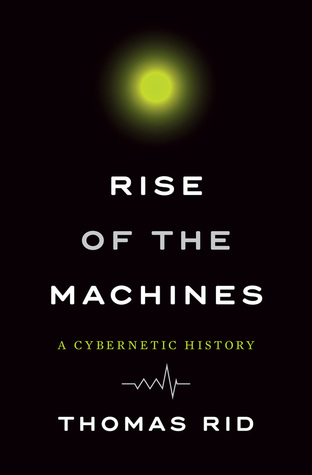 Rise of the Machines

As lives offline and online merge even more, it’s easy to forget how we got here. Rise of the Machines reclaims the spectacular story of cybernetics, a control theory of man and machine. In a history that unpacks one of the twentieth century’s pivotal ideas, Thomas Rid delivers a thought-provoking portrait of our technology-enraptured era.

Springing from the febrile mind of mathematician Norbert Wiener amid the devastation of World War II, the cybernetic vision underpinned a host of seductive myths about the future of machines. This vision would radically transform the postwar world, ushering in sweeping cultural change. From the Cold War’s monumental SAGE bomber defense system to enhanced humans, Wiener’s scheme turned computers from machines of assured destruction into engines of brilliant utopias. Cybernetics triggered blissful cults, the Whole Earth Catalog, and feminist manifestos, just as it fueled martial gizmos and the air force’s foray into virtual space.

As Rid shows, cybernetics proved a powerful tool for two competing factions—those who sought to make a better world and those who sought to control the one at hand. In the Bay Area, techno-libertarians embraced networked machines as the portal to a new electronic frontier: a peaceful, open space of freedom. In Washington, DC, cyberspace provided the perfect theater for dominance and war. Meanwhile the future arrived secretly in 1996, with Moonlight Maze, dawn of a new age of digital state-on-state espionage. That “first cyberwar,” as Rid reveals in a blow-by-blow account, went on for years—and indeed has never stopped. In our long-promised cybernetic future, the line between utopia and dystopia continues to be disturbingly thin.

Drawing on new sources and interviews with hippies, anarchists, sleuths, and spies, Rise of the Machines offers an unparalleled perspective into our anxious embrace of technology and today’s clash of digital privacy and security.

Prev: Rise of the Dragon Moon
Next: Rise the Dark