“Now, thanks to Jonathan Petropoulos's thoroughly researched study, we possess new and important knowledge about the complex and tension-filled relationship between the German higher nobility and National Socialism.... An exemplary analysis.”

— Journal of Modern History on Royals and the Reich 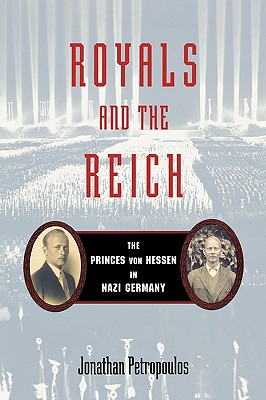 Royals and the Reich

Princes Philipp and Christoph von Hessen-Kassel, great-grandsons of Queen Victoria of England, had been humiliated by defeat in World War I and, like much of the German aristocracy, feared the social unrest wrought by the ineffectual Weimar Republic. Jonathan Petropoulos shows how the princes, lured by prominent positions in the Nazi regime and highly susceptible to nationalist appeals, became enthusiastic supporters of Hitler. Prince Philipp, son-in-law to the King of Italy, became the highest-ranking prince in the Nazi state and developed a close personal relationship with Hitler and Hermann Geering. Prince Christoph was a prominent SS officer and head of the most important intelligence agency in the Third Reich. In return, the princes made the Nazis socially acceptable to wealthy, high-society patrons. Prince Philipp even introduced Geering to Mussolini at a critical stage in the Nazi Party’s development and later served as a liaison between Hitler and the Italian dictator. Permitted access to Hessen family private papers and the Royal Archives at Windsor Castle, Petropoulos follows the story of the House of Hesse through to its tragic denouement—the princes’ betrayal and persecution by an increasingly paranoid Hitler and prosecution and denazification by the Allies.

Prev: Roulette
Next: Ruin and Renewal