“A gripping and supremely readable book by the doyen of our historians of Russia, who truly knows how to bring this story of tsars and commissars to life. It combines shrewd analysis of Russia’s unique appetite for empire with a wonderful narrative pace and fine scholarship.”

— -Simon Sebag-Montefiore on Russia: The Once And Future Empire from Pre-history to Putin 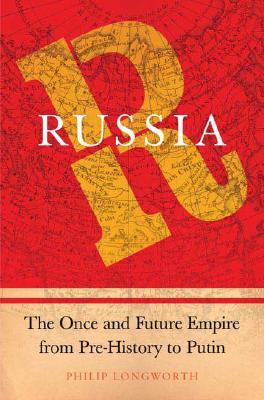 Russia: The Once And Future Empire from Pre-history to Putin

Through the centuries, Russia has swung sharply between successful expansionism, catastrophic collapse, and spectacular recovery. This illuminating history traces these dramatic cycles of boom and bust from the late Neolithic age to Ivan the Terrible, and from the height of Communism to the truncated Russia of today.

Philip Longworth explores the dynamics of Russia’s past through time and space, from the nameless adventurers who first penetrated this vast, inhospitable terrain to a cast of dynamic characters that includes Ivan the Terrible, Catherine the Great, and Stalin. His narrative takes in the magnificent, historic cities of Kiev, Moscow, and St. Petersburg; it stretches to Alaska in the east, to the Black Sea and the Ottoman Empire to the south, to the Baltic in the west and to Archangel and the Artic Ocean to the north.

Who are the Russians and what is the source of their imperialistic culture? Why was Russia so driven to colonize and conquer? From Kievan Rus’—-the first-ever Russian state, which collapsed with the invasion of the Mongols in the thirteenth century—-to ruthless Muscovy, the Russian Empire of the eighteenth century and finally the Soviet period, this groundbreaking study analyses the growth and dissolution of each vast empire as it gives way to the next.

Refreshing in its insight and drawing on a vast range of scholarship, this book also explicitly addresses the question of what the future holds for Russia and her neighbors, and asks whether her sphere of influence is growing.

Prev: Running with Sherman
Next: Rutabaga The Adventure Chef