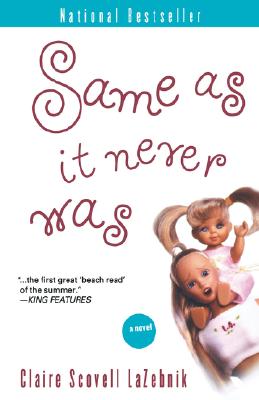 Same As It Never Was

Olivia Martin, the twenty-one-year-old narrator of Claire Scovell LaZebnik’s first novel, Same As It Never Was, drinks, swears, drives fast cars, and is, as she would put it, most definitely not a warm and fuzzy kind of person. And why should she be? She has an unpleasant rich father and an annoyingly clingy mother,their divorce may have freed them from each other, but it didn’t free her from them. The only good thing about Olivia’s life right now is that she’s escaped to college where she thinks she may be falling for the sexy young section leader of her English literature class.

The sudden news that her father and his second wife are killed in a car crash stuns Olivia, but then she gets hit with even more shocking news,they’ve named her guardian of her three-year-old half-sister Celia.

Olivia may not be the introspective type, but she knows enough to recognize that she’s one of the least maternal women in the world, and she tries desperately to explain this to Dennis Klein, the executor of her father’s will. She won’t do it. She can’t do it. She doesn’t really know Celia and doesn’t particularly want to.

But when Dennis quietly says, “It’s the right thing to do,” Olivia realizes for the first time in her life that there are duties you can’t just shrug off. On Christmas Eve, she moves into her dead father’s mansion and faces the terrifying reality of becoming an instant parent. Her mother’s insistence that she come along to help only increases both Olivia’s despair and her responsibilities.

The girl who only wanted freedom and solitude becomes the head of a large household. Through all the expected pitfalls and surprising joys of learning to care for a young child, Olivia never loses her acid tongue or her sense of humor, but she does gain an appreciation of her own innate decency,something she’s kept hidden from everyone, even herself, up till now. And when she finds herself torn between the two men who love her, she comes to realize that decency matters between the sheets as well as in the nursery.

Written in strong, humorous prose, Same As It Never Was captures the privileged world of the west side of Los Angeles and the triumphant joy of sacrificing freedom for the love of your family and a future with the right guy.