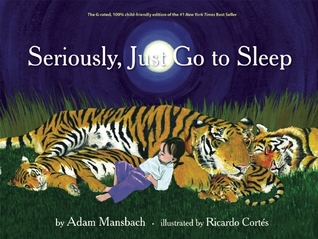 Seriously, Just Go to Sleep is the G-rated, traditional-sized, children’s version of the book every parent has been talking about.Go the F*** to Sleep, the picture book for adults, became a cultural sensation by striking a universal chord for parents. Now, Adam Mansbach and Ricardo Cortés reunite with Seriously, Just Go to Sleep, inviting the children themselves in on the joke. As parents know, kids are well aware of how difficult they can be at bedtime. With Cortés’s updated illustrations (including a cameo appearance by Samuel L. Jackson, who narrated the audio book version of Go the F*** to Sleep) and Mansbach’s new child-appropriate narrative, the book allows kids to recognize their tactics, giggle at their own mischievousness, and empathize with their parents’ struggles—a perspective most children’s books don’t capture. Most importantly, it provides a common ground for children and their parents to talk about one of the most stressful aspects of parenting.

Seriously, Just Go to Sleep came to be when Mansbach read a highly censored rendition of the original book to his three-year-old daughter, and she recognized herself as the culprit and was delighted. “We were getting a lot of feedback from parents, saying that their kids loved the book—read in an altered form—because they recognized themselves in the character of the mischievous kid who’s winning the bedtime battle, and thought it was hilarious. So we figured we’d do a companion volume that lets kids in on the fun.”