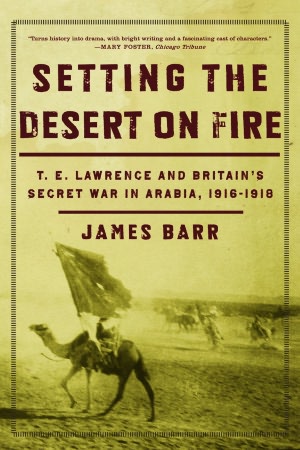 Setting the Desert on Fire

It was T. E. Lawrence’s classic Seven Pillars of Wisdom that made the Arab Revolt a legend and helped turn the British intelligence officer into the mythical “Lawrence of Arabia.” But the intrigue behind the revolt and its startling consequences for the present-day Middle East have remained a mystery for nearly one hundred years. James Barr spent four years trawling declassified archives in Europe and crossing the hostile deserts of the Middle East to re-create the revolt as the international drama it really was. A colorful cast of Arab sheiks, British and French soldiers, spies, and diplomats come together in this gripping narrative of political maneuvering, guerrilla warfare, and imperial greed. Setting the Desert on Fire is a masterly account of a key moment in the history of the Middle East, and a portrait of Lawrence himself that is bright, nuanced, and full of fresh insights into the true nature of the master mythmaker.

Prev: Service With a Smile
Next: Seven Days