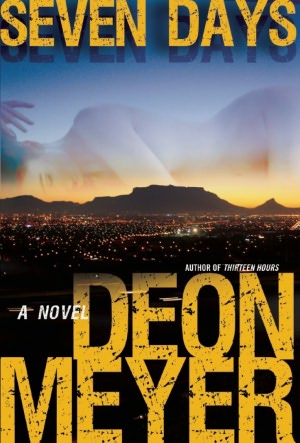 ​A police officer is shot dead. The next day, one of his colleagues is as well. Then the South African police receive an email threatening an additional cop killed each day until a cold case is solved. Inspector Benny Griessel is charged with reopening the file on the murder of Hanneke Sloet, an ambitious lawyer stabbed to death in her luxury apartment. There’s no apparent motive and no leads, just a set of nude photographs and a burly ex-boyfriend a rock-solid alibi. Then more policemen are shot and the pressure mounts. Can Bennie solve the case and stay sober?

Featuring the fantastic characters from Deon Meyer’s Thirteen Hours, which won the Barry Award for Best Thriller in 2011, Seven Days is another gripping adventure from a masterful writer at the top of his game.

Prev: Setting the Desert on Fire
Next: Seven Flowers