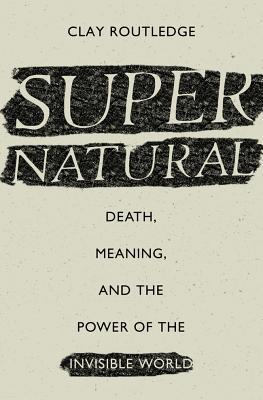 Death, Meaning, and the Power of the Invisible World

Humans are existential animals. We are all fully aware of our fragility, transience, and potential cosmic insignificance. Our ability to ponder the big questions about death and meaning and the anxiety that these questions can provoke have motivated us to be a species not only concerned about survival, but also about our significance.

The quest for transcendent meaning is one reason why humans embrace the supernatural. Children naturally see the world as magical, yet when humans reach full cognitive development they are still drawn to supernatural beliefs and ideas that defy the laws of physics. Even those who consider themselves secular or atheists are seduced by supernatural belief systems. Clay Routledge, an experimental psychologist, asserts that belief or trust in forces beyond our understanding is rooted in our fear of death and need for meaning. In Supernatural: Death, Meaning, and the Power of the Invisible World, he reveals just how universal supernatural thinking is, and how this kind of thinking is adaptive and even healthy.

Routledge takes readers through a wide range of fascinating research from psychology that paints a picture of humans as innate supernatural thinkers. Exploring research from the emerging field of experimental existential psychology, he makes the case that all humans have the same underlying existential needs, with similar coping strategies across times, cultures, and degrees of religiousness. Surprisingly, cultural institutions such as sports, environmentalism, secular humanism, and science also showcase supernatural attributes and qualities. Indeed, studies show that supernatural thinking assuages stress and anxiety and improves mood and psychological well-being. But there is a potential dark side to this line of thinking: it can lead to personal and social problems, and some individuals can take it a step too far. However, Routledge argues that this dark side of supernatural thinking is the exception, not the rule. Further, supernatural thinking is ever-present, and should unite us instead of dividing us.