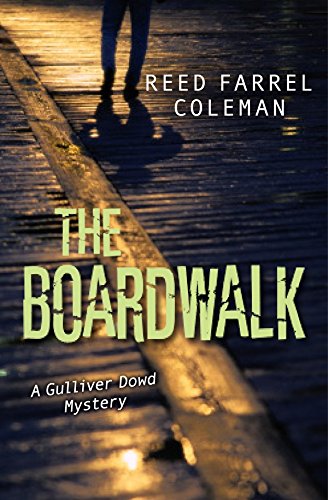 Gulliver Dowd is finally on the verge of unraveling the mystery behind his sister’s murder when the man who is supposed to give him the scoop, NYPD Detective Sam Patrick, is gunned down on the Coney Island Boardwalk. As Dowd delves into Patrick’s accidental shooting, he uncovers a pattern of corruption and deceit involving organized crime and the police. But there are tough choices to be made. Just how much is Gulliver willing to sacrifice in order to find out why his sister was murdered and to unmask the killer? The answers aren’t found in the moon or the stars, but on the boardwalk.

The Boardwalk is third in the Gulliver Dowd Mystery series, featuring a New York private investigator. In award-winning author Louise Penny’s words: “A little man with a huge heart and a huge chip on his shoulder, Gulliver Dowd swaggers into the crime fiction world and takes his place with the great investigators. Smart, vulnerable, wounded, heartbreakingly hopeful, I just adore his company.”

Prev: The Blur
Next: The Bob Watson