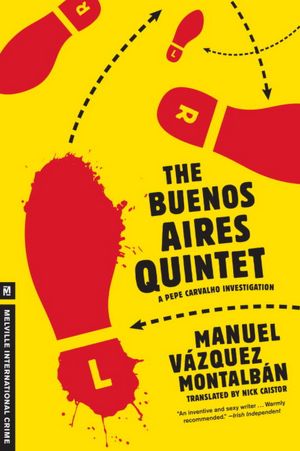 The Argentine army’s “Dirty War” disappeared 30,000 people, and the last thing Pepe Carvalho wants is to investigate one of the vanished, even if that missing person is his cousin. But blood proves thicker than a fine Mendoza Cabernet Sauvignon, even for a jaded gourmand like Pepe, and so at his family’s request he leaves Barcelona for Buenos Aires.

What follows is perhaps Manuel Vázquez Montalbán’s masterpiece: a combination white-knuckle investigation and moving psychological travelogue. Pepe quickly learns that “Buenos Aires is a beautiful city hell-bent on self-destruction,” and finds himself on a trail involving boxers and scholars, military torturers and seductive semioticians, Borges fans and cold-blooded murderers.

And despite the wonders of the Tango and the country’s divine cuisine, he also knows one thing: He’ll have to confront the traumas of Argentina’s past head on if he wants not only to find his cousin, but simply stay alive.

Prev: The Buddhas of Bamiyan
Next: The Bullfighter Checks Her Makeup