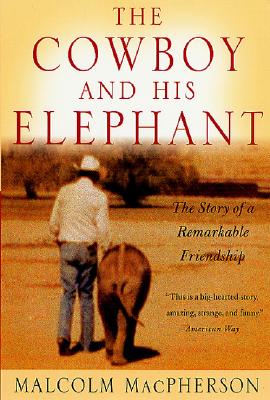 The Cowboy and the Elephant

In the late 1980s, a female baby elephant was born on the plains of Southern Africa. In a “cull,” her family was slaughtered. Only the newborn female’s life was spared. Terrified and bewildered the young elephant was transported to America to be sold.

Bob Norris is a cowboy with an enormous empathy for animals. Handsome as a movie star, he was the Marlboro Man, with his face appearing on billboards around the world. But something was missing. When the hurt, vulnerable little elephant, Amy, came into his life, an incredible bond between the most unlikely of friends was forged.

Bob adopted Amy and through close observation, gentle training, humor, and endless perseverance, this accomplished horseman gradually coaxed Amy into overcoming her mistrust of humans, and her fear of the world. Amy became a beloved member of the Norris family, and partner to the ranch hands, but Bob knew from the start that the ultimate goal was for Amy to regain her confidence and her independence - even, if it were possible, to go back to the savannahs of Africa.

Amy may have left the cowboy’s life, but she never left his heart. This is a story of mutual friendship, of genuine love and compassion, and foremost, this is an American story with roots that run deep in the values and traditions of the American West.

Prev: The Courage to Change
Next: The Crazyladies of Pearl Street